When someone we love is hurting, we feel useless and broken. It's never really the case, for healing can always take place...
If you can't sleep, then get up and do something instead of lying there worrying.  It's the worry that gets you, not the lack of sleep

Brutus has always been prone to some hurties on one of his left toes and every time it acts up bot Arvid and I feel completely helpless as to what to do to make him feel better.  He is our baby and when he hurts we just want to make everything better for him.  No different from what everyone feels when their child is hurting or their pet as well.

It's been over two weeks now that we have we have seen him starting to chew at the bad toe.  Started when we left him and went to the Bahamas.  His trigger for hurties is us going away.  Makes it that much more difficult at times to leave him even though we know he is with Liliana, who is like his second mama.

Last night around 9:45pm we both noticed that his left paw had swollen up to twice it's normal size.  Brutus being Brutus still was running around like crazy and doing what the stuff he loves.  Every so often he would rest.  Raise the paw and just stand on three paws instead of four.

Well that did not sit well with us, the swelling I mean.  Arvid was sure we could wait until morning to take Brutus to his regular vet.  I was sure he needed emergency care immediately.  To the pet emergency room we went.

I knew exactly what Brutus needed, but was not sure why his entire paw was so swollen.  Was hoping the Vet would give us some answers.  Seems like she had no clue either.  As Arvid put it, "she does not inspire confidence in me and I don't think she knows what she's doing.  Brutus will never come back here."

For those of you who has never had, and hopefully will never have the experience of visiting a pet emergency hospital, my advise: unless it's life threatening don't go.  Wait until you can take your pet to their regular vet.  Not only do they charge you almost twice as much, but they carry nothing to relieve your pets pain which was our main reason for taking Brutus.  Anyway the antibiotic made him sleep well.  Only problem is that what was a swollen paw is now a swollen paw with a gaping hole in the middle. 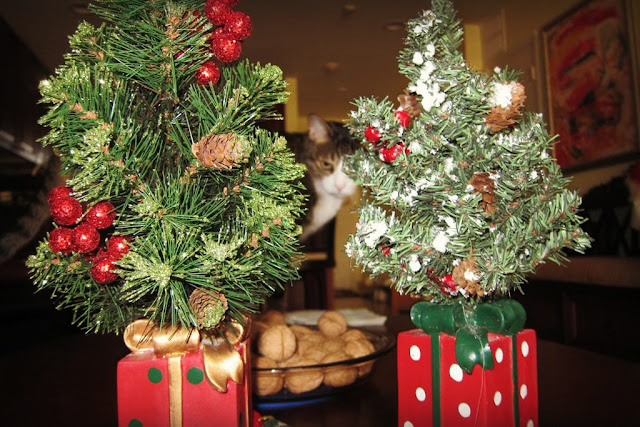 For Brutus we will do whatever to insure that he is always happy and  that he is free of pain.  Throughout the experience Arvid kept talking and petting Brutus telling him, "everything is going to be all right little boysie."  Every time I see Arvid and Brutus I know how lucky I am.
Yes, together everything is going to be all right.
Wishing you all a good day...As my niece says "5 more days to Christmas auntie Nad"!

Everything will be okay in the end. If it's not okay, it's not the end...
We can judge the heart of a man by his treatment of animals..