Kill them with success and bury them with a smile...

Puerto Rico loses it as as Monica Puig wins Island's first-ever first Olympic gold.
I think "I united a nation" Puig, who ranked 34th in the world, said in an
emotional interview following her astonishing performance against
the second seed.  "And I just love where I come from." 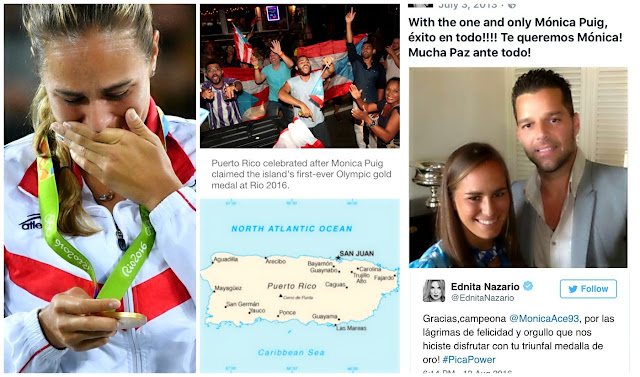 I was not born in Puerto Rico, but I was raised there and it was home for us for the
longest of times.  It is still home for my sister Nirvana and kids. The kids
study in the United States, but when they go home, home is Puerto Rico.
The kindest and warmest of people live in the island of Puerto Rico.
For us it will always be one of the best times in our lives.

The island of Puerto Rico is one big ongoing celebration.  You see one of their own
just defeated Germany in winning the gold medal in women's tennis.
At Rio 2016, Monica Puig became the first woman in history to win a
medal for Puerto Rico at the Olympic Games, and the third Puerto Rican
overall to compete for a gold medal at an individual sport. 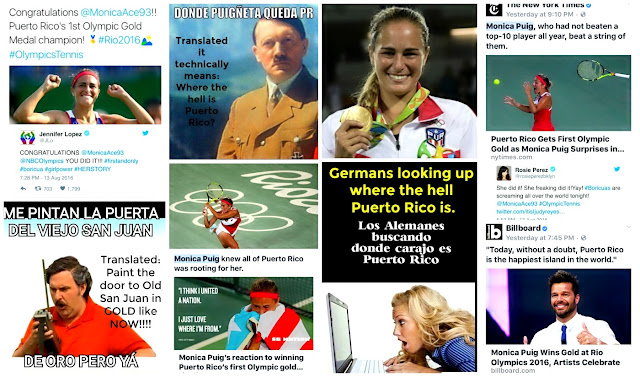 Yes the island is one big "fiesta" right now and my sister is right there with everyone.
I'm Indian, and when Indians party there is no end to it, but when Puerto Ricans
party, that is a lifestyle.  Their life is a celebration all day all night long, and we never
miss out on anything because my sister keeps us updated like it or not. 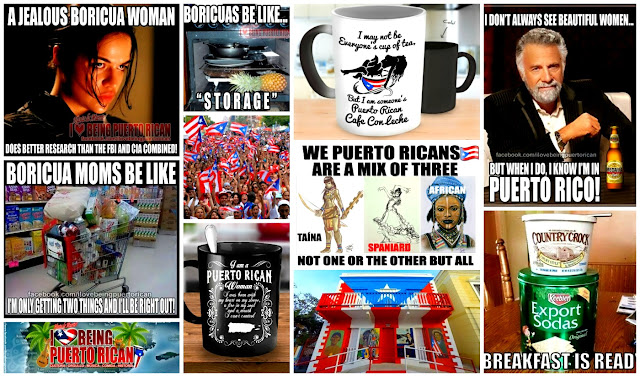 The above collage is better understood if you are Puerto Rican or if you were raised
in that culture.  To all Puerto Ricans and to Monica Puig.  Well done.  You made yourself
a hero over night and you made the island of Puerto Rico Proud.  As Ricky Martin
best puts it, "today without a doubt, Puerto Rico is the happiest island in the world."

Many others failed because they had a lot of excuses.  You succeed
because you didn't have any.  I want to inspire people.  I want someone to
look at me and say, "because of you I didn't give up."...