The past beats inside of me like a second heart.
Nothing is ever really lost to us as long as we remember it...
Throughout my life so far I have had 8 kitty cats.  Five
when I lived in California, and 3 in Florida, that's of course
including Sniff Sniff.  I cannot imagine not having a kitty. 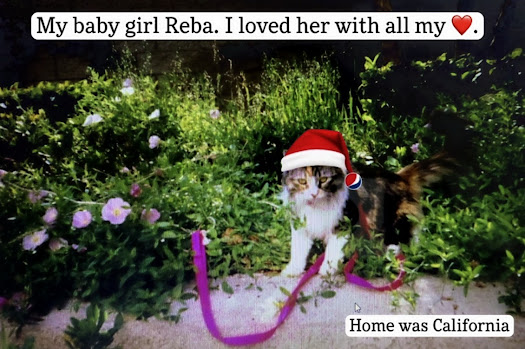 I have loved them all more than I could have
imagined possible. My Reba was the only female.  She
hated everyone, but me.  I adored her.  We found her in a
dumpster eating scraps from a pizza box.  Her meows did
it for us.  And from that moment she became ours. 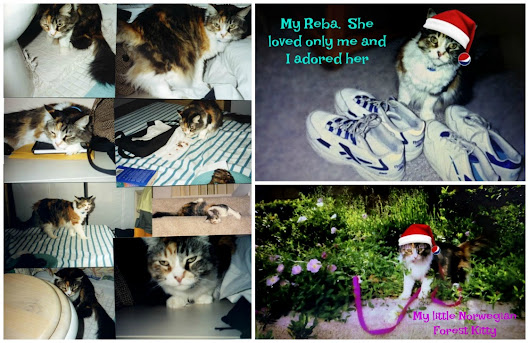 Once she was a part of our lives we thought: won't it
be good if Reba had a little brother or sister?  We then saw
an ad in the newspaper.  Someone had some kitties and were
giving them away.  We took off and found ourselves
choosing this tiny little dude with and extra toe. 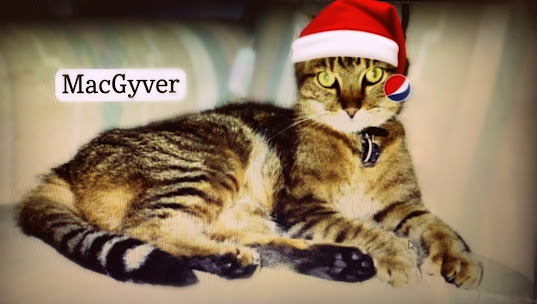 And so we welcomed Macgyver.  He was into
everything, and at the time the show Macgyver was
popular hence the name.  He was the the total opposite
of Reba. Loving, gentle, playful and funny. 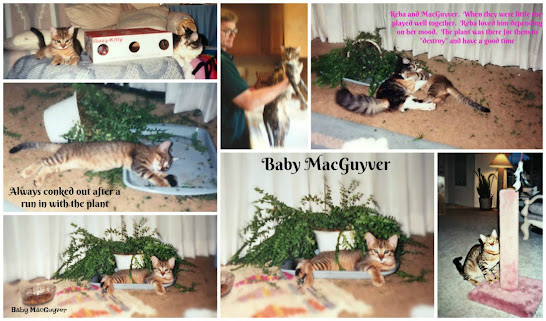 He loved everyone and everyone loved him.  The males
were all lovable.  Reba made up for viciousness and meanness
they never had.  Even so, I adored and loved her like crazy. 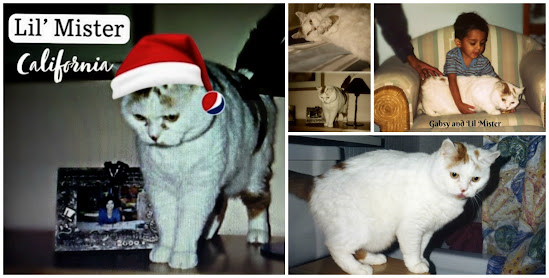 Lil' Mister came into the picture by accident.  Someone
was giving away kitties, we of course went to look and
fell in love right away with this fluffy white kitty with
the little teardrop.  Love at the first meow.  Again. 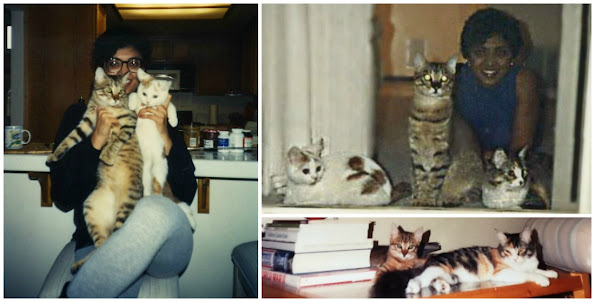 He was love, he was chubby and just another happy
addition to the family.  he and MacGuyver became
immediate friends.  Reba mostly tolerated him. 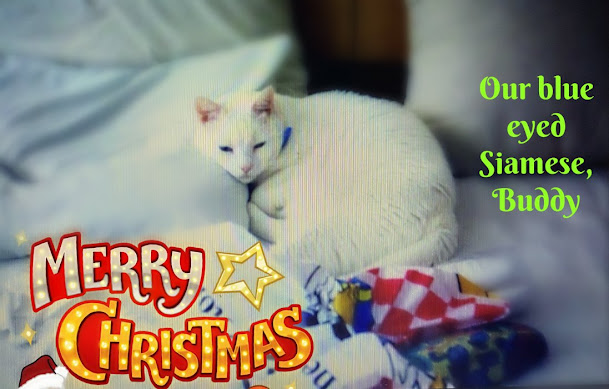 We never meant to adopt Buddy.  He was a feral
kitty who always came to the backyard.  His white coat
was black and he was scared and hungry.  There was
always food left for him and he kept coming. 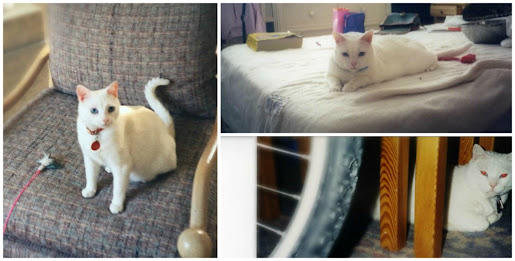 We decided to trap him, take him to the vet give him
his shots and let him loose. Never happened.  He became
a part of our lives and I never looked back. 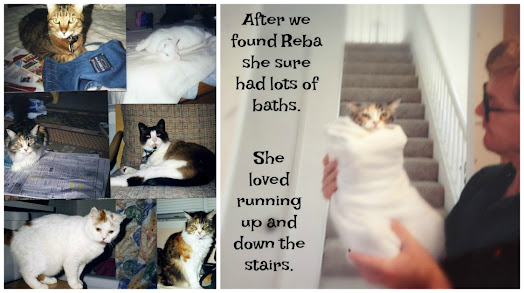 He was always a little scared, but he bonded with
MacGuyver, and Lil' Mister immediately.  Once again
depending on her mood, Reba tolerated him. 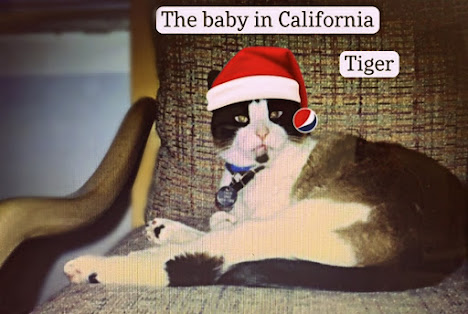 Enter Tiger.  He was so tiny that he fit in the palm
of my hand.  Someone abandoned him in a paper bag
at the mall.  I picked the bag up and took him home. 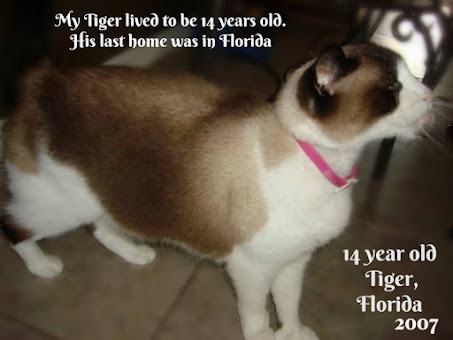 Tiger became kitty #5.  Because he was so little
compared to the other 4, he had no fear.  Just like Shadow,
Tiger was fearless.  When Reba acted up he could care less.
He just kept moving and running in circles.  He wore
everyone out until he was totally conked out. 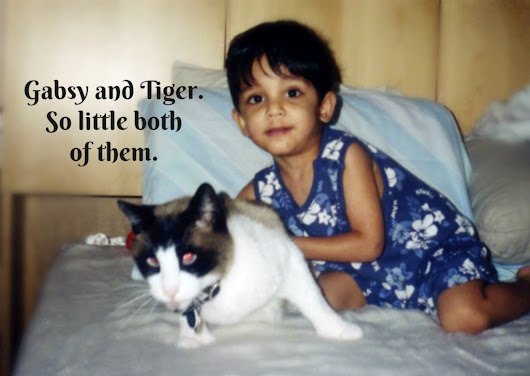 These 5 kitties introduced me to the world of cats.
From then on I could and can't imagine life without
one of these fur babies.  I would love for Sniff to have
a little sibling, but Arvid would never allow that. 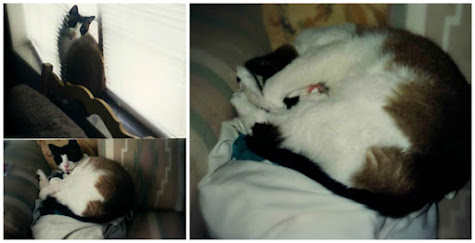 Even so, I am grateful everyday because in October
of 2006 Arvid agreed I could have a kitty. My Brutus,
he took a piece of my heart with him. He brought joy
and happiness into our lives like never before. 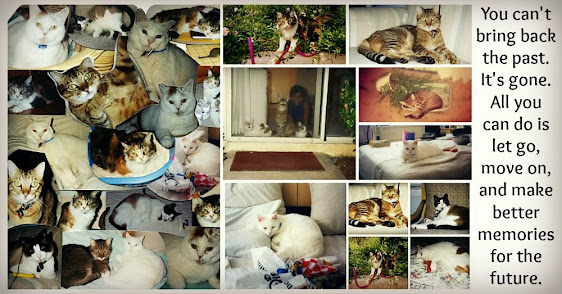 Looking back at these pictures brought back so
many memories.  For a while there I was back in California
picturing each and everyone of them running around the house
and playing together.  That is all except Reba.  She only
played with them if the mood was right.

Life has been good to me.  I have had wonderful so many
beautiful experiences.  The sad ones have also taught
me that I may not have everything I want, but I sure have
everything I need.  Today my thoughts lie with the life
I had in California and these 5 kitties I loved so much. 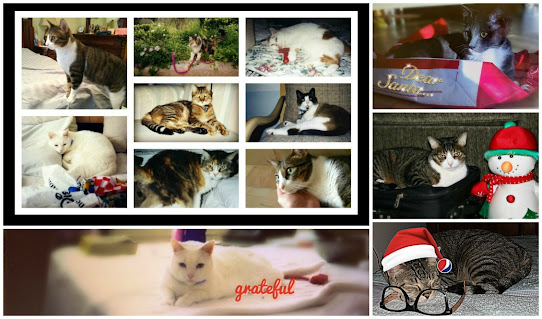 There are memories that time does not erase...
Forever does not make loss forgettable, only bearable...
~Nadiya~
Posted by Nadiya at Wednesday, December 16, 2020