Panthers Made It To The Playoffs....

In Canada, you're not a hockey player until you've lost some teeth.... 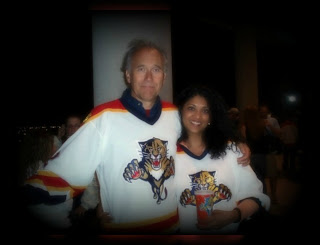 Hockey's the only place where a guy can go nowadays and watch two white guys fight...


You may or may not be a hockey fan, but here in Florida we are all celebrating the fact that the Florida Panthers have made it to the playoffs.  Hard work, dedication and many lost teeth but the Panthers are on their way to hopefully becoming the next Stanley Cup Champions (yes Dan!) 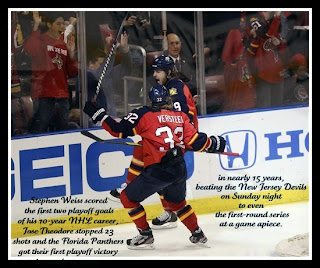 A dozen years, eight coaches and a couple hundred players later, the Panthers are finally back in the Stanley Cup playoffs. And even though the Florida franchise fortunes seem to finally be changing, maybe it's fitting that Brodeur — the NHL's winningest active playoff goalie by far — will again be the guy at the other end of the rink.
The New Jersey Devils and Florida Panthers met on Panthers territory for their first playoff game against the Devils.  Unfortunately, the Panthers lost game one.  Not a good start, but look at it the way we do, still six more games to go.   Game number 2 was also played on Panthers territory...Florida.  This time the Panthers beat the New Jersey Devils. 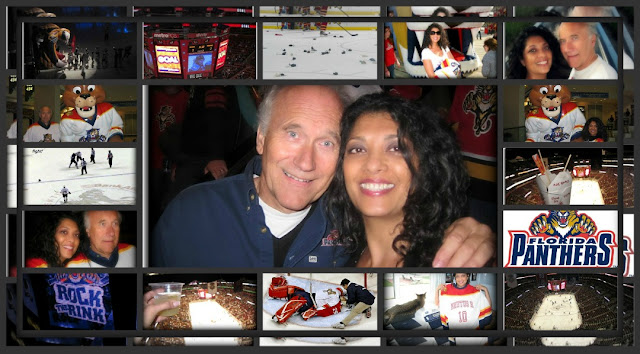 We were not able to make either of these 2 games because we were in Tampa for the Blues Festival.  The next two games were in New Jersey.   Game 3 the Panthers came back from zero score to beat the Devils.  Game 5 the Panthers lost miserably to the Devils.  Now the series tied 2 to 2.


Come game 5 tonight, the Panthers play once again in Florida.  Arvid has already bought us tickets to Duffy's Sky Club for Saturday at The Bank Atlantic Center.  We have also invited 2 friends with us so tonight the Panthers will definitely have to beat the New Jersey Devils (sorry Dan).  The truth is that if the Panthers are going to advance, they will have to do what they could not in 2000, they have to find a way to beat a goalie who has hoisted the Stanley Cup three time, owns two Olympic gold medals and has just about every record imaginable at his position.

Sounds pretty tough, but the Panthers can do it if they want to.
Before I met Arvid Hockey was not even something I ever thought of.  It was just another game they showed on TV.  In my home the game my dad watched was and still is Cricket.  He also played it for many years and was good.  Hockey was not know to me until Arvid.  Now we spend many a Saturday or Sunday going to the games and just having a really good time.  Arvid is much more a fan than I am, but I enjoy seeing a good game and nothing better than being there on the spot to cheer our Panthers!

Labels: I believe we have a team that can make the playoffs
Newer Post Older Post Home