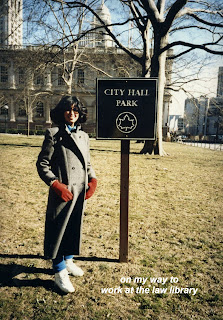 All it took was a picture to transport me back to my days in NY.  A good snapshot stops a moment from running away.


Many years ago, I moved to New York together with 2 sisters to further continue my studies in medicine.  The first thing we did was forget all about studying, at least immediately.  I found a part time job in a law library.  I actually told the law librarian that it would be to her advantage to hire me.  She asked why and I said because I am good at what I do, even though I had  never worked in a law library nor had any clue what I was supposed to do. I was hired and that was that! 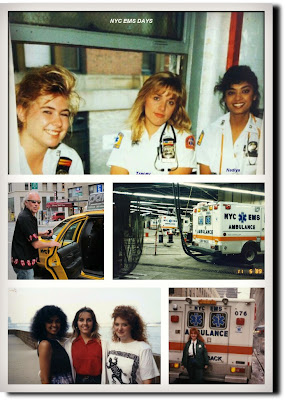 I loved every moment there, the people were interesting and life was happening so very fast all around me.  Being in the middle of the city the one thing you would never miss are the yellow taxis and the ambulances going lights and sirens all day long.  Life is always happening in this city.  Not one moment of dullness.  For some it can be too much, me I wanted to experience it all.
This city fascinated me.  I was taken in by the non stop action involved.  I wanted to be part of this lifestyle.  I wanted to work badly for the city of New York and specifically for EMS.  I wanted to be part of the action.
Questions were asked about how come I was not going to continue my studies in medicine and my response was always the same.  It does not interest me.  I do not want a boring life.  I want excitement, adventure and at the same time I was looking forward to having direct contact with people and to make a difference.   My mind was set and no one and nothing was going to change it. 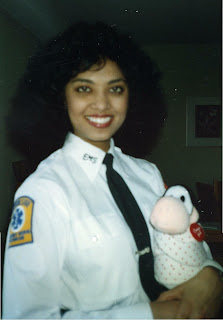 I took the test and training to become an EMT.  Fairly easy and having a college degree in Biology was helpful.   At the time my name was Nadiya Riley and everyone used to kid me and say that I must be one of those dark Irish girls.
I was already loving it.  In the beginning I was a bit shy, but that did not last long.  You see to be a survivor in New York you had to be assertive.  I was and I am grateful to all the people who showed me the ropes.   There was a lot to learn and learn I did.  I was what they called a fast learner.
After being paired with several people I finally ended up in a unit called 13Boy. My partners were two Irish girls.  Tracey and Jennifer.  When two of us were on the other had the day off.  We were crazy.  We loved that job and we had fun every single day.  The things I saw were not always nice.  I had people die in my arms.  I have seen people run over by trains, hung, jump from buildings, stabbed, and so much more, but I have also seen the kindness in total strangers.  I have witnessed childbirth and have held a newborn in my arms.  I have been attacked by "patients" on drugs, but even so everyday I learnt something new and I met someone new and interesting.
The part of the job I was not crazy about was the maggots on peoples infected body.  Our job was to clean them as best as we could, bandage and transport to the hospital.  Sorry to say in those cases I would give them a garbage bag and tell them to put it on, usually on the leg as a sock and to tie the ends together.  I also refused to have anyone breathing  stinky breath on me.  Not always possible, but you have to set some rules.
Overall everyone was nice.  You did meet a few not nice ones, but that's the same everywhere.  One thing was for sure though.  No one was allowed to mistreat me.  A lady once tried and I told her she could step right out of the ambulance and walk to the hospital.  Unless you were drug induced, there was no reason you could not treat us with respect.  You see if you don't respect others it just goes to say you don't respect yourself.
I loved my days in EMS.  My time in New York was one of the most exciting periods of my life.  I would never change a minute of it.  It taught me self assurance and to always stand up for what I believe and to NEVER take crap from anyone.  Does not matter who you are.


The thing I can't tell is whether cab drivers yield to each other out of fear or respect...