Life to me is a journey - you never know what may be your next destination...


Travelling with Brutus is now routine.  Brutus is a very good traveller and never acts up nor cries during the trip.  Brutus has been travelling with us now for many years.  His first trips were to Eleuthera, Bahamas. He knows we are about to travel as soon a she sees suitcases and his carrier.  Then he's not happy.  On the day of the travel it's always hide and seek with him.

The first few times we took him on an airplane we gave him a little tranquilizing drops just to make sure he did not get too scared.

Both Arvid and I noticed that instead of relaxing him these drops actually made him nervous and totally alert...bottom line he was never relaxed.  We took Brutus all the time with us to the Bahamas.  I can't say for sure that he was too happy during these flights, but he was always good.

He has also been going with us to Chicago.  We stopped giving him his medication and he is so much more relaxed and on our flight home on Tuesday, for the first time he was able to actually take a few cat naps.

When Brutus travels with us, we buy him his very own ticket.  Usually his ticket costs more than ours.  We also upgrade to better seats just because Arvid refuses to have anyone sitting next to us.  Says it's better for Brutus.

On our flight home, Brutus had his very own seat right between Arvid and I.  He was very well behaved, and    was a hit with many passengers who could not believe how good he is.  A few little girls just begged to pet him.  Arvid was gentle, but firm when he told them they could not.

We normally buy him a small bottle of water, I take a syringe and every once in a while we give him water with it.  Because we fly with Brutus we always take the late flight.  This gives him time to use the litter and take a nap before he travels.  On Tuesday,he did not go to the littler before we left Chicago.  He did nothing for 17 hours and yet did not do anything in his carrier.

As soon as we got home, I fixed his litter pan and he went.  He spent a few hours getting used to his surroundings again and when he was satisfied he came to bed with us and slept until 6am.  Strange, as soon as we got to Florida, he started sneezing.  Maybe the AC.

He was exhausted on his first day back   Did not sleep much, but as soon as he got comfortable with being home again he found one of his favorite spots and took a long snooze. 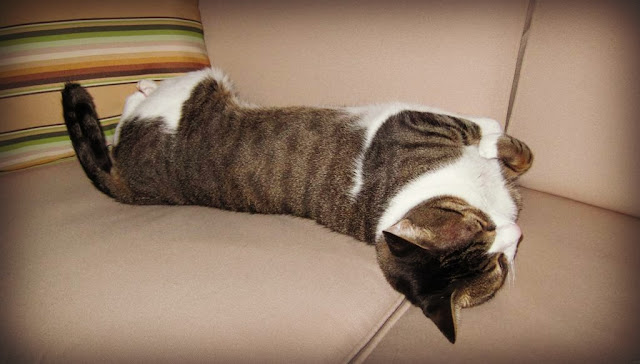 All is good.  We are back to working on fixing up a house and staying busy again.  Yeah, good to be back.  We are all happy.

Wishing everyone a good day.

No one realizes how beautiful it is to travel until he comes home and rests his head on his old, familiar pillow.


If you wish to travel far and fast, travel light. Take off all your envies, jealousies, unforgiveness, selfishness and fears.