Walking On A Leash...

Dogs come when they're called; cats take a message and get back to you later.... 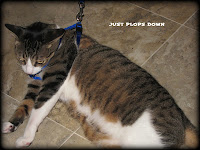 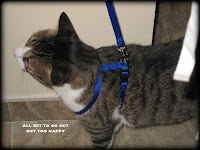 Cats unlike dogs are not made to be walked on leashes (at least Brutus is not) that is unless you train them from very young.  Brutus being an indoor cat has never had the need to be on a leash, but in recent years with our travelling all around with him, it seems that it is becoming more and more necessary to train him to walk with the leash on. 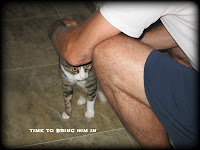 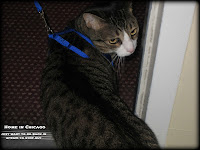 When we took take him with us to the Bahamas, there is never a need to take him out of the carrier, but when we go to Chicago we have to take him out of his carrier upon check-in at the security gate.  The first time I just held him.  This scared Arvid more than anything else because he was terrified Brutus was going to run away and we would never find him again.  Because of this we bought him a leash about 2 years ago.

We first tried the leash in Chicago and all Brutus did was throw himself to the floor and never got up again.  We were just trying to teach him to go with Arvid to take the garbage out.  Did not work out so good.  Here in Florida we also tried the leash a few times and in the beginning that was also not so good, but since we have been taking him out everyday for a little "outing" he is getting more and more relaxed when he sees it and of course he loves the treat we give him after each "outing"

My girlfriend Liliana has taken him out on her balcony a few times when she had him two weeks ago.  She sent some pictures and that made me smile seeing the look on brutus' face.  First terrified then resigned.  Before Brutus, I had 5 other kitties and they had no problem going out with the leash.  They loved it and I never even had to hold on to it.  They of course were introduced to "walking" outdoors from very young.

Know your cat. If it doesn’t mind being handled, is pretty confident and not easily spooked, it’s probably a good candidate for leash training.

Cats can be cooperative when something feels good, which, to a cat, is the way everything is supposed to feel as much of the time as possible...

Labels: The cat is domestic only as far as suits its own ends
Newer Post Older Post Home