I don't know about the world, but I know kids. And I feel like sometimes kids don't get involved because they think, what can I do? I'm just a kid. And really kids can do so much....

Just the other day Arvid and I had just got home from quite a bit running around.  Don't know what it is with him, but there are days when running around seems to be in high gear.  Arvid is the type who prefers to go in person to a persons's office rather than make the call.

So after being out for hours we come back home and Arvid looks down into the parking lot.  He see's a huge moving truck trying to get out and no matter what it was not happening.  It took Arvid 10 minutes of watching, and at the same time telling the person what he was doing wrong.  Of course the only one who heard him was me.  Standing right next to him.

Finally he says, "I can't see him doing it this way anymore.  Let me go and help him".
Off he goes and after another 10 minutes of heavy hand motions the driver of the truck finally decides to do as Arvid says and he backs our to the main road.  By now there was a crowd observing. 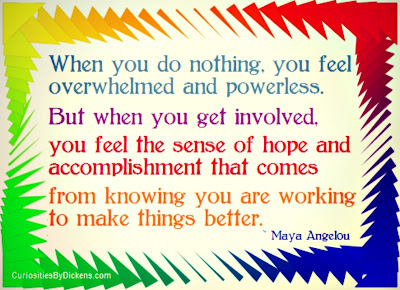 I even took Brutus out to see his dada at work.  Brutus was more curious with the smells and the sounds coming from being outside of the apartment.  For a few seconds he was quiet and enjoying himself until the neighbors came to say hi to him.  Then it was back inside.  Not the bravest of kitties.

Many neighbors came to me and thanked me for what Arvid had just done.  See there was a traffic jam created by this truck.  Thing is no one saw it fit to help the truck driver.  His helper was no good according to Arvid.  Arvid can't sit still.  He has to do something.  I think it is always a good trait.
Hope your day is filled with good things coming your way.


When you do nothing, you feel overwhelmed and powerless. But when you get involved, you feel the sense of hope and accomplishment that comes from knowing you are working to make things better...