4 Health Rules You Can Break Today

If you obey all the rules, you miss all the fun....

They're the imperatives for well-being that have been drilled into us forever--"Drink eight glasses of water a day!" "Eat nine servings of fruits and veggies!" "Stay away from red meat!" But it turns out that taking care of yourself isn't quite so black-and-white, says Harvard Medical School psychologist Alice Domar, PhD, coauthor of Live a Little! Breaking the Rules Won't Break Your Health. "Research is revealing that whoever wrote the old guidelines didn't have the whole picture, and that there are more paths to optimal health than we previously thought," Domar says. Happily, the new rules are more user-friendly than the old ones. Here, four tips to live by.
Old Rule: Drink eight glasses of water a day.
New Rule: Eat your water.

According to Howard Murad, MD much of your daily requirement for water is contained in foods: Fruits, vegetables, beans, and cooked whole grains like oatmeal and quinoa (which soak up moisture in the pot) all deliver servings of water. And, as he points out, they offer the added bonus of nutrients: "Watermelon and cucumber are more than 90 percent water, but they also contain antioxidants. With a glass of water, all you get is water." You'll know you're hydrated when your urine is colorless or pale yellow and you're rarely thirsty.
Old Rule: Eat nine servings of fruits and vegetables.
New Rule: Fill half your plate with produce. 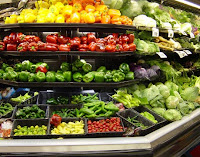 A serving of broccoli is about five florets. A serving of raw spinach, one cup. A serving of mango, roughly the size of a fist. "It's not surprising that people get confused over what, exactly, a serving is," says Washington, D.C., dietitian Rebecca Scritchfield. Her advice: Stop counting and instead make half of every meal produce. "You don't need a big mound on your plate. Six asparagus spears at dinner, a spinach salad at lunch, and a sliced banana and some berries at breakfast should do it." And quality counts: Even two or three daily servings of deeply hued fruits and veggies (like blueberries, bok choy, or red peppers) may help reduce your risk of cancer and heart disease, Scritchfield says. "It's like darts. The goal is to hit the bull's-eye. But hitting nearby is good, too."
Old Rule: Avoid red meat.

New Rule: Beef in moderation can be healthy.


Red meat was long considered a heart attack on a plate because it's high in saturated fat. But a 2010 study from the Harvard School of Public Health found that the cardiovascular risk comes from processed varieties, such as sausage, hot dogs, and cold cuts--not from steak, hamburgers, and other nonprocessed cuts. (The real culprits may be salt and preservatives). Red meat is a good source of iron and immunity-boosting zinc-two nutrients some women don't get enough of. Beef (especially grass-fed) also contains high concentrations of conjugated linoleic acid, a type of fat that may decrease cancer risk and help reduce body fat.
"But not all red meats are created equal," says Leslie J. Bonci, director of sports nutrition at the University of Pittsburgh's Center for Sports Medicine. She recommends choosing very lean cuts and avoiding anything labeled "prime," as it will have more fat marbling. And try not to eat more than three 4- to 5-ounce servings (about the size of an iPhone) per week.
Old Rule: Keep your BMI between 18.5 and 24.9.
New Rule: Eat healthy, exercise, and let your weight settle naturally. 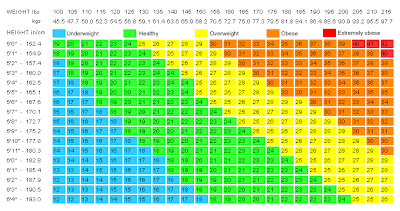 Physicians use BMI (body mass index)--a ratio of your weight to your height--as a tool to diagnose obesity. But critics say BMI ignores muscle mass, and a 2011 Obesity study notes that it also ignores a person's hip circumference. "People come in different sizes and shapes," says Joanne Ikeda, nutritionist emeritus at the University of California, Berkeley. "The idea that everyone should fall under 25 is ludicrous." A person can have a high BMI and still be healthy, Ikeda argues. Research supports the theory: A Journal of the American Medical Association study found that fit women--even if they were overweight according to their BMI--were less likely to suffer a heart attack than those who were out of shape. Ikeda advises her patients to stop obsessing over their BMI, eat a nutritious diet, and log 150 minutes of exercise per week. "A healthy lifestyle results in a healthy weight."
The golden rule is that there are no golden  rules....
~Nadiya~
Posted by Nadiya at Wednesday, June 20, 2012

Labels: Any fool can make a rule - and any fool will mind it.
Newer Post Older Post Home