No one can feel as helpless as the owners of a sick kitty cat...
A bend in the road is not the end of the road... unless you fail to make the turn..
When the one you love is hurting and you can't do anything to ease their pain,you feel so helpless.  In this case our little Brutus is hurting and all we can do is watch him and make sure he is not in dangers way.

On the day we left Florida, we noticed he was limping badly.  You see Brutus knows when we have to travel.  He hates when we leave him so he "acts" out.  He somehow knows a few days in advance that something is going on.  He gets nervous and he starts biting his front paw.
He thinks we will be leaving him alone even though Arvid kept telling him we were taking him with us.  You see Arvid talks to Brutus like as if he were a baby.  He explains everything to him like as if he, Brutus understands.  Sometimes I think Brutus does.
The vet gave him an antibiotic (injection) lasting for 14 days.  He also gave him an anti-inflammatory shot.  Like all cats, Brutus hates going to the vet.  He usually never hisses, except at the vet.  He also cried when he was given the shot.  Yes, it broke my heart.  Arvid just can't see Brutus in pain.  He gets all emotional like I have never seen.  At one time he wanted to punch out the vet technician who "hurt" Brutus. 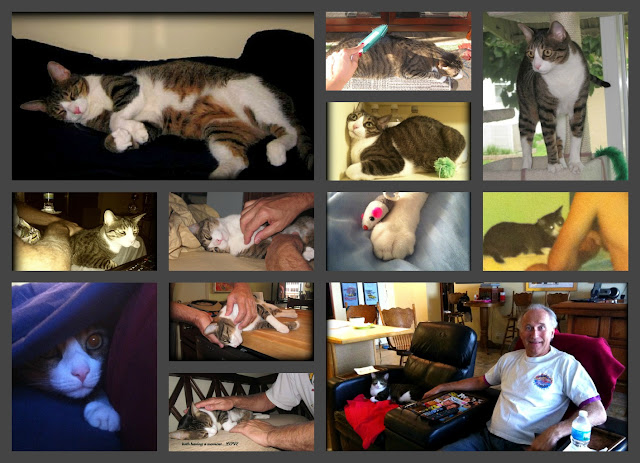 We arrived in Chicago and all seemed better until the next day.  Brutus was just totally spent.  He was completely liveless and hardly got out of the bed.   We were very concerned, but just kept an eye on him. Eventually he got back to his usual self.  A few days after this, his paw was all red and split open.  Of course now we carry him around.  We rearranged the entire apartment making it easier for him to get to places and not have to jump too much.
Yes, we probably spoil him and we are probably at fault at times, but we can't help it.  He is after all, the baby:), and as it's been said,
"What greater gift than the love of a cat?" 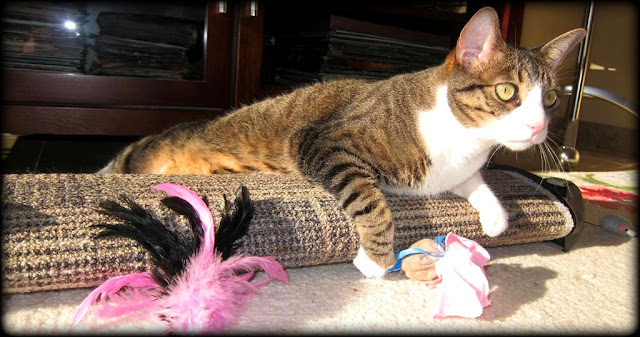 Treat you pet right and you will have a loving companion for years to come.
Have a good day all!


I know God will not give me anything I can't handle.  I just wish that He didn't trust me so much...

Labels: You can't run away from trouble. There ain't no place that far.
Newer Post Older Post Home