Things are going to be OK.  Maybe not today, and maybe not tomorrow, but eventually it will all be OK...

These last two days have been especially difficult and traumatic for both Arvid and I.  It all boils down to Brutus and the infection on his paw that does not want to get better.   After all kinds of treatments he finally had a biopsy done and the results came back...not good.

I received a call from Brutus' vet late Wednesday night.  It was not a call  bearing good news.  Actually it was the worst news possible.  The doctor said Brutus has a very nasty infection and all the antibiotics he was being given were not the correct ones, therefore they were not doing a damm thing to cure him.

The doctor continued to explain...not good news.
Brutus he said has an infection that needs to be treated aggressively with some very strong antibiotics.
Being me I had already done lots of research as to what Brutus could have, and I found out that the usage of these antibiotics carry a death sentence for our baby.

Here I was listening to the doctor explaining how without this antibiotic Brutus will not heal, and the infection will just continue to eat his little body away.
With the antibiotics he will heal, but will develop kidney failure and most certainly die.

The worst thing is that we agreed to have the doctor treat him with the antibiotic.
Arvid and I were heartbroken and there was absolutely nothing we could do.  That was the worst part.
We were helpless.  It was a long night and every time I thought the tears were done I was wrong.

Looking at Arvid cry silently with his chest heaving was more than I could take.  He looks at me and he says "I love Brutus you know. I never thought I would get so attached to the little dude. He changed me you know.  Brutus made me a better person." Yes, he took Arvid by surprise and now he makes our life complete.  I refuse to think of life without Brutus.

Never ever did we expect to have this kind of news.
I cried all night and was awake with Brutus most of it.  We comforted him and we petted him refusing to accept that we may only have him for a short time in our lives.
Arvid and I always said we want him forever and ever with us.  OK not possible, but you get my drift.

So many things came to mind all at once and the worst  was not seeing him running around us, playing and making our lives so happy and complete.  Arvid said, "do you have pictures with him and I sitting together watching the soccer games, me petting him at nights, carrying him around....

I got it,  Arvid was as terrified as I at the thought of something happening to Brutus.  Thursday morning I took him to the vet.  Start of the daily antibiotics and to check up and clean his wound.  After a long talk with his doctor, I left feeling a bit better.

The doctor said that due to the potency of the antibiotic he decided to treat Brutus with something milder.  Already I was seeing a little light of hope.  After much talk it came down to Brutus possibly being blind due to this new antibiotic and if it did not work he will have to be amputated. 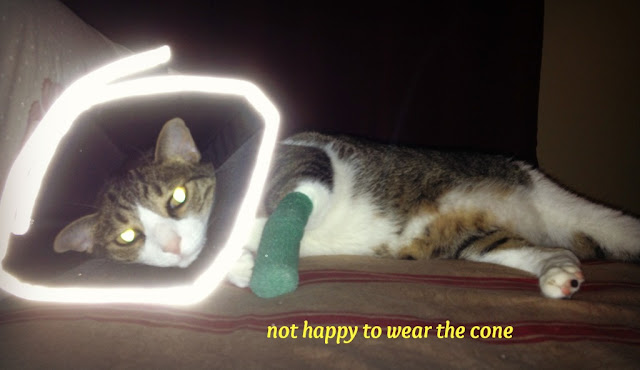 WOW!  this is hope I guess!  I grabbed on to anything and left Brutus at the vets office for his treatment.
First thing Arvid asked was, "what did the doctor say?"  My answer, "good news, kidney failure is not the main side effect of this new antibiotic, blindness is, maybe amputation if it does not work and eventually it may cause kidney failure."  I'm not diplomatic and Arvid almost passed out.  Thankfully he was sitting.

The first thing I said to Arvid was, "I don't want to go to Arizona and California."  Immediately we started cancelling our plans to travel.  Arvid would have gone even if he was not 100% better, but with Brutus not doing well...there was only one choice.  We stay with him. 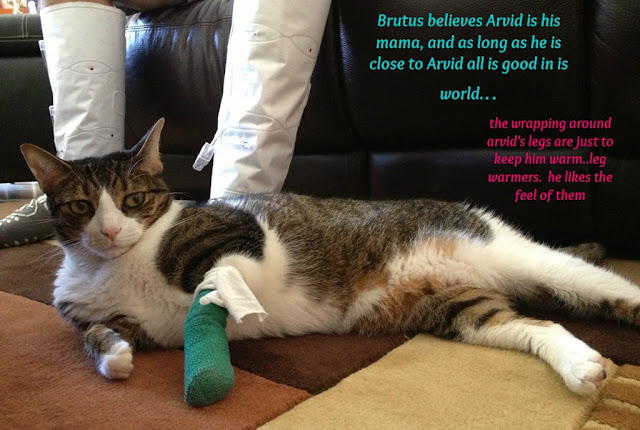 Between Arvid and Brutus my days are around the clock caretaker.  I don't mind.  I want them better.  Daily  trips to the vet for Brutus and hardly any sleep these last few days.  I am a bit tired, but I just want them back to normal.
Arvid is much better, but still needs help getting up.
Brutus already had his visit to the vet for today.  Now he is resting.  Arvid is also resting and I have a few moments to sit..

Right now it's a bit difficult here, but things will soon be better.

In the end everything is going to be all right, and if it's not don't worry,
it just means it's not the end...