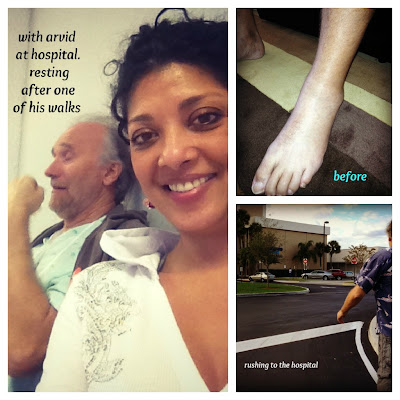 One minute he was feeling good next thing you know his leg was swollen.  I looked at him, grabbed the car keys and said we are off to the hospital.   This was Monday.  We came for a routine ultrasound for his leg.  One look at the results and the technician rolled Arvid straight into the emergency room.  Rule out blood clot in the leg.
Well sure was not what we expected to hear, but it made so much sense.  Arvid has been having pain, cramps and all sorts of discomfort with this leg for a very long time.  Years ago and just recently I kept telling him and his doctor that he has a circulation problem.  No one listened to me and the doctor just said, "I think he is dehydrated"
Arvid was happy with this explanation.  I was not.

We got to the ER where it took almost 3 hours before the doctor showed up. When he did he said, "I hear you have a blood clot.  I should have been here much sooner, and I really can't find any of the test results they just did on you." 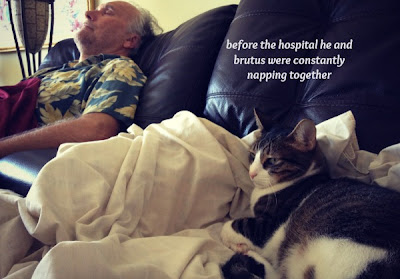 Well that sure was a boost of confidence.  Arvid looks at him and says, "what kind of place is this that no one knows what the hell is going on."  The doctor just stared blankly at us and said he will go see if he can find the results.  Never saw him again that night.  Again Arvid's response was, "this place is a zoo.  No one knows anything."

He sure was not winning any congeniality contest here, but being Arvid he could care less.  This was one time I was telling him he should be "nicer" because you depend so much on the nurses and aids when in a hospital and if you piss them off who knows what happens.

Well Arvid pissed a nurse off the very first night of course.  The nurse left him and said "goodnight, sleep well".  Did not even help him into the bed, which at that time was kinda difficult for Arvid to do alone.  I was not there so I could not assist. 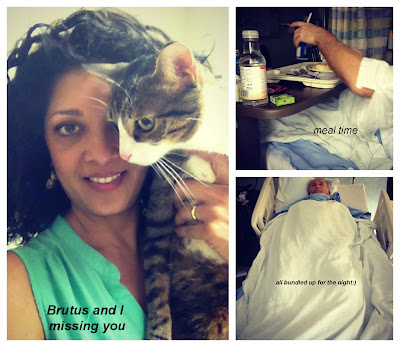 Right now Arvid is on Coumadin, a blood thinner medication.  He has to remain in the hospital until he reaches a certain level.  Right now he is not at that level.  Otherwise he looks great, he moves better but is crabby as hell and just not happy with anyone but me around him.  He says that every time he starts to fall  asleep someone comes into the room for something.  Making him mad and honestly, as I sit with him during the days it's a non stop of people coming in all the time.

I'm telling you a hospital is not a place to get any rest.  It's freezing cold in there.  I wear jeans, socks,  under shirt, a turtleneck and a jacket.

Leaving him alone at nights is the worst.  I am with him for about ten hours everyday.  I see the look of sadness in his eyes as I walk away and I do my best not to cry.  As I leave he says, "I want to come home to you and Brutus."

We want him home also, but we want him better and if it means another night or two in the hospital so be it.  In the meantime, life goes on.  Brutus gets his shot every morning, then for the rest of the day I sit with Arvid at the hospital.  Soon he will be home with us and that is all we want....  Him better and home where he belongs.  Being Arvid he is impatient to get home and impatient with everyone.
I love him just the way he is:)