Hockey is like love
it's emotional, it's heartbreaking, it's magical, it's surprising,
it's exciting, it's amazing, it means everything to you...


Just a few days ago we were watching The Chicago Blackhawks play against the Tampa Bay
Lightning. Chicago Blackhawks   Hockey is not my sport of choice, but when the
Blackhawks play Arvid and I are very interested.  5 years ago as we moved to
Chicago they won the championship.  We happened to be in the city for the
final two games. What a time it was. We loved every moment.  In 2013
they also won the championship.  Hoping for the same in 2015.
It's that time again, Stanley Cup Playoffs. 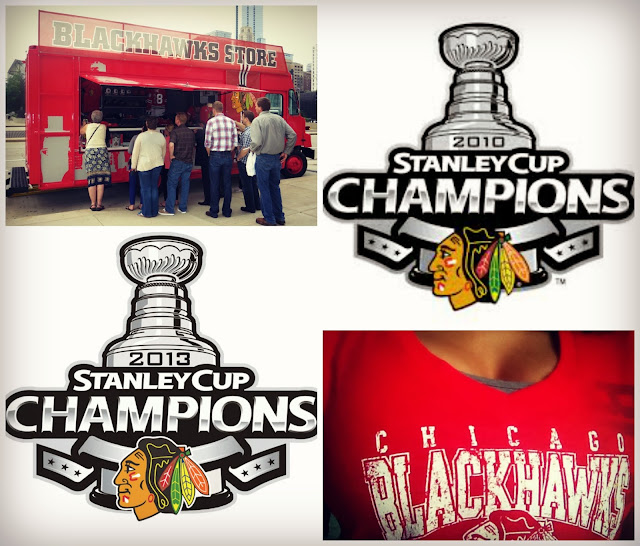 The city of Chicago was decorated with everything Blackhawks.  I was also very
caught up in it all.  I acquired a few Blackhawks memorabilia of my
own and was happy to show them off.

As we watched the game the other night it felt very nostalgic.  The Blackhawks are once
again in the finals and how amazing it would be if they won. They are playing
against Tampa Bay and the truth is I also like Tampa Bay, but when it
comes down to choosing a team, the Blackhawks it is.

More nostalgia was a friend of mine living in Chicago always posting pictures of the
city decorated Blackhawks style. From what I remember, the city definitely promotes
the Blackhawks BIG time. Every restaurant, every his stop, every building as I remembered
has something Blackhawks.  Makes me miss Chicago very much, but it sure is nice
that through FB I can relive some of it.  Some of the pictures you see here
today are borrowed and some are from the time we lived in Chicago. 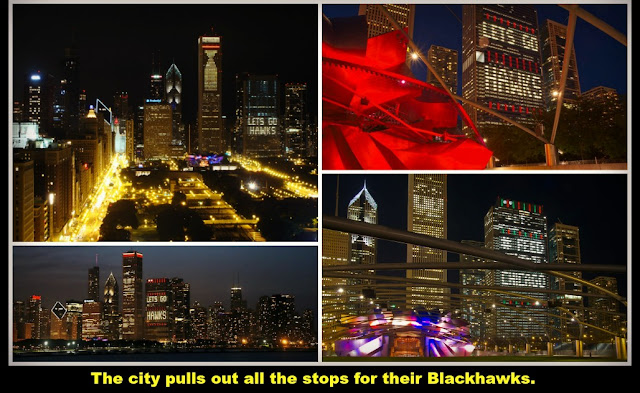 Though I want them to win, I am just not capable of watching the entire game.
Too stressful for me.  So in between the regular TV shows I switch to see
the scores.  If I missed something my friend in FB updates me.

So far the Blackhawks are at a disadvantage.  Tampa bay is leading the series 2-1.
Still many more games to come and of course we are both going for the Blackhawks.
This would be the perfect time to be in Chicago.  Especially if they win again. 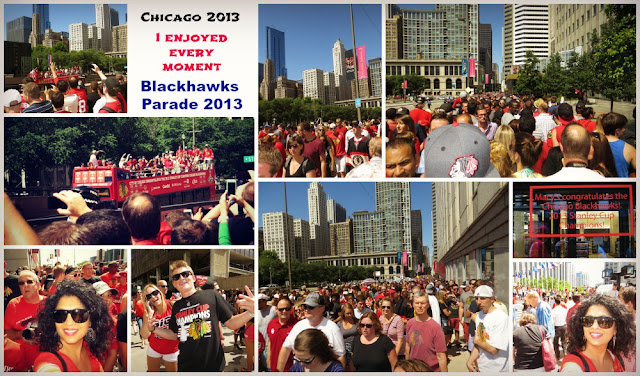 I love Chicago.  I miss the city and the years we lived there will always
be extra special for us.  It is where we were relaxed and stress free.
Let's go Hawks!!!  Series now tied 2-2.

Eventually, I think Chicago will be the most beautiful great city left in the world.
I adore Chicago. It is the pulse of America...