Memories warm you up from the inside. But they also tear you
apart.   My memories beat inside me like a second heart...

As we left Chicago memories of last year came flooding back to me. Last year
we left with Brutus. Who was to know that in exactly one month after that he
would die!!! If you would have said that to me I would think you were crazy. 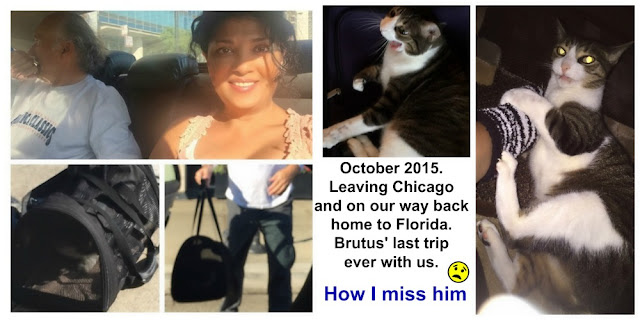 This year we left Chicago with Sniff.  He was not medicated.  We did it when we
left from Florida to Chicago but that did not go so well.  Within a few days of
arriving in Chicago we had to take him to the vet. Like Brutus Sniff was extremely
good in the plane.  He did give a few hollers in the taxi and a few meows in the
plane, but overall he was very good. He sat the entire time with Arvid.
I wanted him on my lap, but Arvid said that he was sleeping
so we did not want to disturb him too much.

I did not think I was going to be sad when we left, but truthfully we both were.
Even so,  looking forward to going home.  As the plane took off from Chicago I thought
of Ana and Queta and it made me sad. I thought of Brutus and made me even sadder.
Queta texted me as soon as we landed asking how Sniff handled the flight. 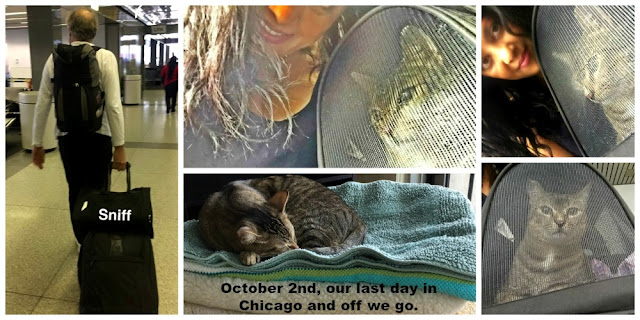 I wrote this as we were up in the air.  I was thinking of opening the door when we get
home, and it is with a heavy sadness knowing that no Brutus will be running up to us!
No wonder Arvid said it felt different.  For me in that moment it was an empty
feeling in my heart when we walked in the door.  Don't get me wrong, Sniff is
a joy and we love him.  It's just home has always been, Brutus, Arvid and I.
Tomorrow is 11 months without our Brutus and 7 months without Shadow.

I hope Sniff likes his Florida home.  Chicago's condo is much smaller than our
Florida home so I know Sniff will enjoy the space and the running around.  His first
night was spent wandering around, a few cries now and again.  It is still a little
unfamiliar to him.  He's checking out every little nook and cranny around. 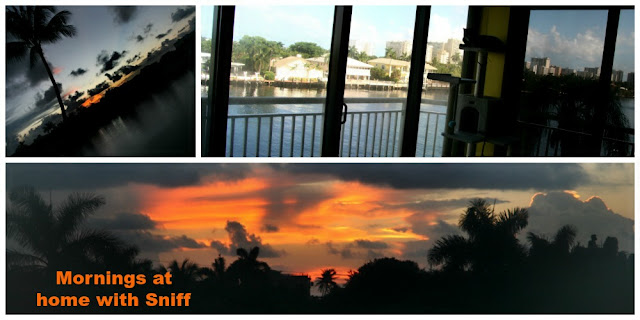 I am not the type of person to be sad all the time. I am usually happy, easygoing
and I laughed often.  I miss that person.  I want me back. Of course to get me back
I have to work on it. I am. Yeah I am, but some days are just hard.  Leaving
Chicago was harder than I thought but for whole bunch of different reasons.
Soon it will be a year that Brutus died. I have not held him in a year.  An entire year
soon that I am missing my Brutus. Also it will be 7 months since that little Shadow died.
I'm just a little overwhelmed right now, but being home and close to them and
seeing both Shadow's and Brutus' favorite spots at home makes me feel in
some way closer to them.  At least I tell myself that it will be so.

I have never dreamt with my Brutus nor with my little Shadow.  Is that normal?
Shouldn't I at least be able to dream with them and "see"them?  Why won't they come
to me in dreams?  Don't they know I NEED to see them?  I need to see you Brutus!!!!!!

Here at home the only thing you hear is Hurricane Matthew.  The stores are almost all
sold out of water, canned foods, Home Depot is almost sold out of all things needed in
an emergency such as a hurricane.  Here in Fort Lauderdale, we expect rain by
late Thursday night early Friday morning.  Unless of course things change, but
for now we are pretty much safe at home.  Just in case I have made a bag with
supplies ready in case we need to go to a hotel with Sniff.  He's coming. 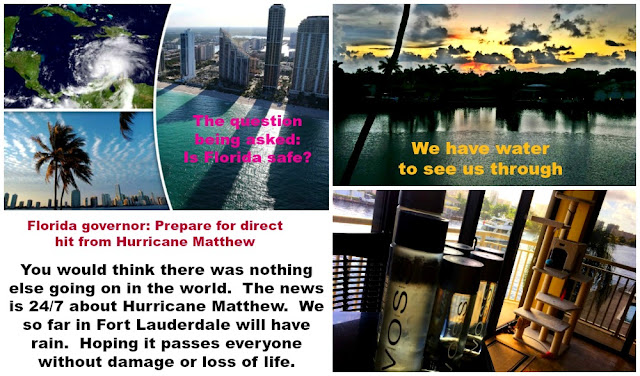 When Brutus was alive we always had a bag packed for him.  In Florida the word
hurricane is not unfamiliar.  People just go crazy and buy everything out.  Most people
would have supplies for months if what I saw going on in the grocery stores today.
I did not buy much because if we lose power it all goes to waste.  Have water
for us and Sniff.  Food and litter for Sniff.  We are set and ready.

The big question on the international news these last few days has been:  Is Florida safe?
What can I say?  We live here.  We have seen a few.  We have seen destruction, but
fortunately we have been "lucky"  Yes we have had direct hits to places we have lived,
but we weathered the storm without damage.  Sadly many have not been so fortunate. 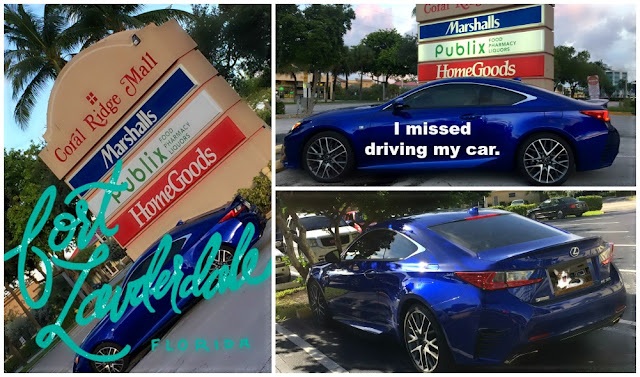 Today has been a beautiful day so far.  Sniff is getting more familiar with his home.
Arvid and I have been very busy.  Already yesterday we have made a few trips to
the warehouse among other things.  The apartment is messy.  Papers, mail,
"junk" and stuff everywhere.  Slowly it will get back to "normal" 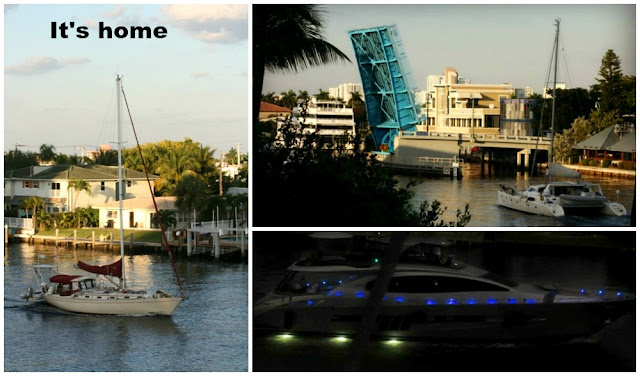 Hope you have all been having a good day so far.  Still lots to do.  Staying busy
has it's merits.The mind and body gets worn out by night.  Last night we
were both bone tired.  For once we both slept without interruptions
all night long.  It's been a while that this has happened.

There are memories that time does not erase... Forever does not
make loss forgettable, only bearable. Memories are bullets. Some whiz by
and only spook you. Others tear you open and leave you in pieces...

Labels: I've gone days without talking to you months without seeing you but not a second goes by that I don't think of you
Newer Post Older Post Home