Sometimes the hardest part isn’t letting
go but rather learning to start over... 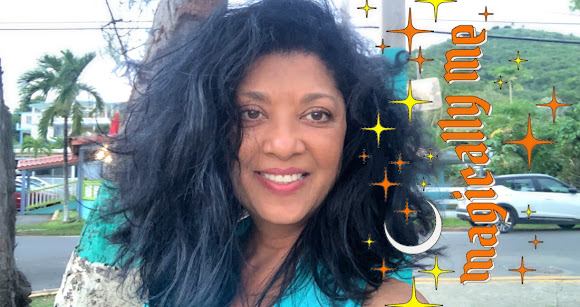 When Brutus was alive, he loved getting dressed up.
At least I told myself so.  I dressed him up all the time.  Shadow
also wore the same outfit, but Sniff was not too happy with it. 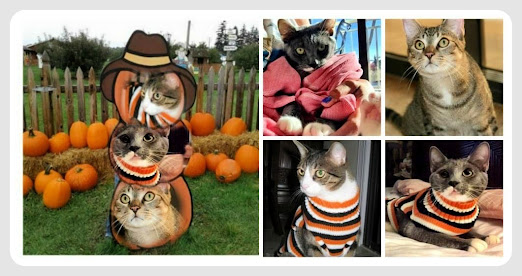 Marbles and MacGyver; from the very start they were
approachable.  I was able from almost the beginning to
touch and pet them.  They are always together. 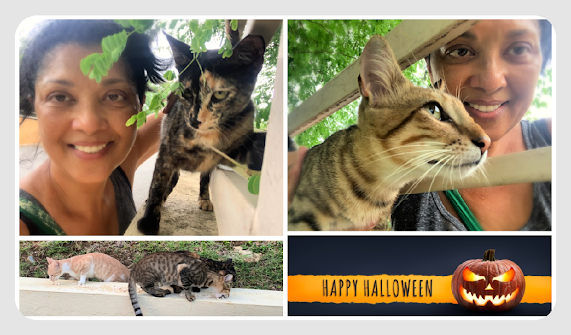 Baby has turned out to be smarter than I had given
her credit for.  She finds safe places to hide, and
I hope she always will.  I love her very much 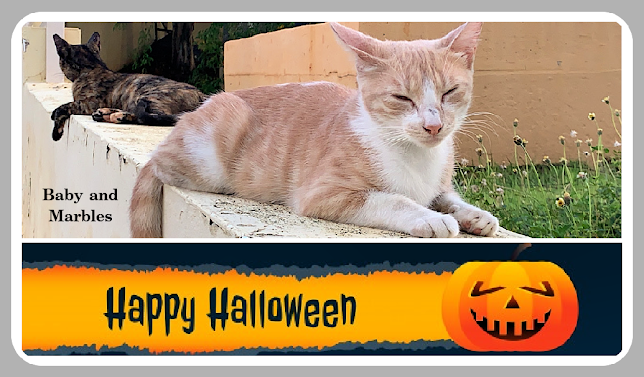 A family of four, is now a family of one.  Remaining
is just Rocco.  Spitfire died. And yes, I love them them both.
They have become both very affectionate.  Spitfire used to
follow me around, and Rocco now loves being touched. 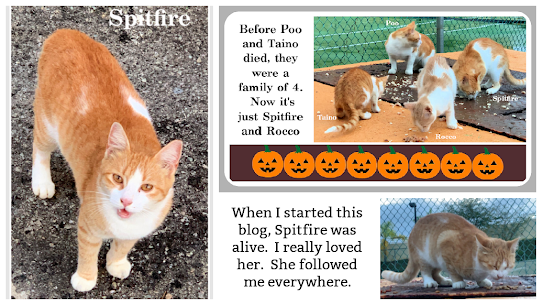 When we returned to Puerto Rico in March of this year,
Mama had her first litter of three.  She had Whitepaws, Spotify
and Rascal.  Today the only remaining baby is Rascal.
Strange that the two kitties that died were named
by Arvid.  Arvid really liked Whitepaws. 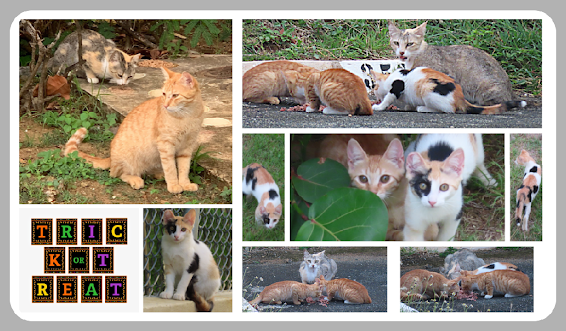 I see Mama and Rascal as soon as I step out of the
front door.  I have gotten used to them being there, Mama has
had a personality change.  Now she let's me close to her, but
she's still not totally affectionate with her boy Rascal. 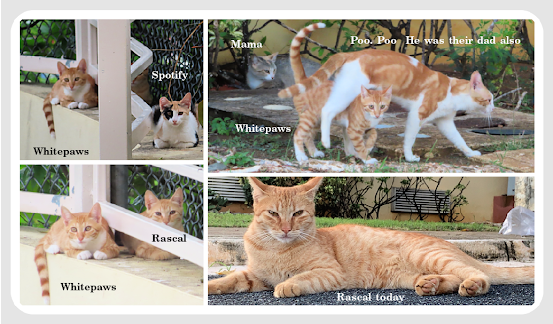 Senior and Bandit were always very scared of everything.
Bandit died, but I will never forget those eyes.  Senior to
this day is not too approachable.  He comes for foodies, but
takes off as soon as I get close to him.  Something about Bandit
and Seniors' eyes.  Gentle even though feral, and I love them.
I loved Bandit for that short time he was around.💙💚 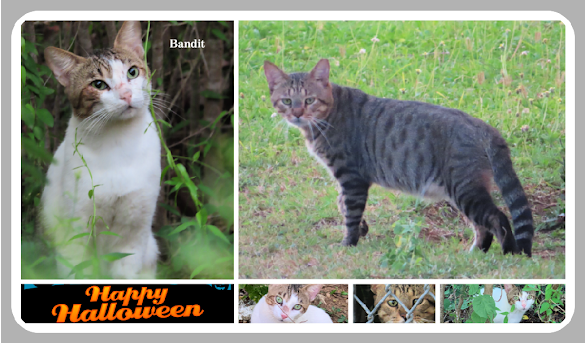 The kitty I first encountered when we came to PR in
2020 was Shygirl.  At the time I thought she was a he.  Shygirl
holds a special place in my heart, just like all the others.  She
is still very cautious and so far has not allowed ne to get too
close to her. She looks for me mornings and afternoons. 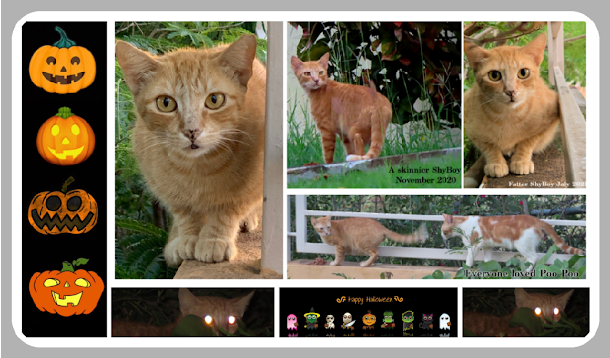 The fastest kitty on the block is by far Milo.  Even
everyone at the vet's place said the same.  Milo can
outrun all the others.  He was a loner, but lately he has
been getting closer and closer in distance to all the others.
Milo showed up at the same time as Marbles and MacGyver.
He has the sweetest little voice, and yes I also love him 💙 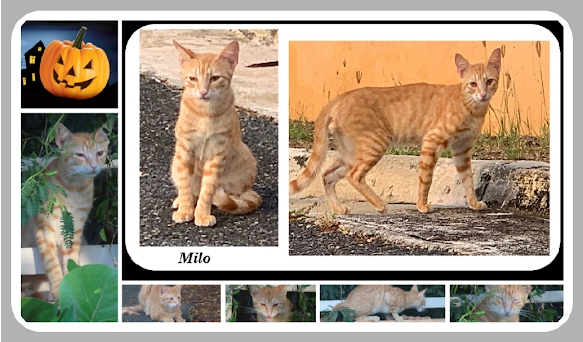 Rocco is a character.  When I give him foodies he
tries to catch it and he is constantly scanning to see who
is getting foodies and who isn't.  He moves around to
where the food is.  I really love this little guy. 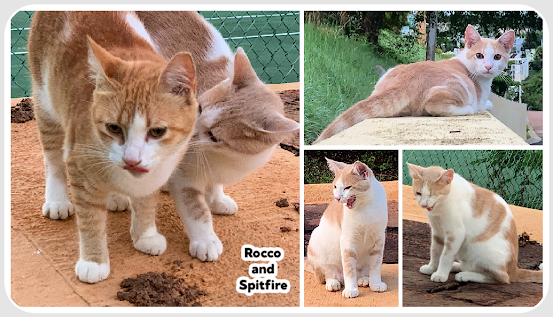 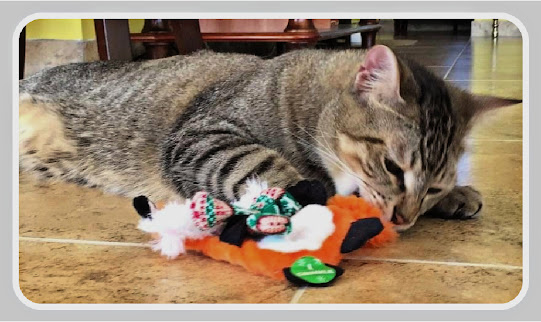 Life is like a book.  Some chapters are sad,
some are happy, and some are exciting.  But if you
never turn the page, you will never know what the
next chapter holds.  Loss is a part of life. 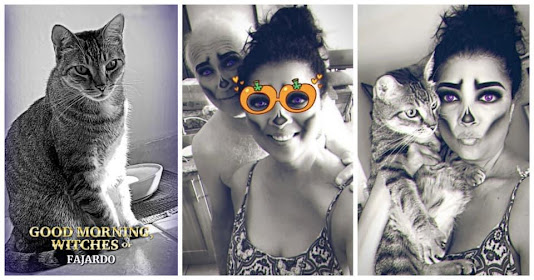 Meeting with my sister today for dinner.
Anytime we get to see her is a time that I cherish.  Always.
The pandemic was not all bad for us.  It brought us
to Puerto Rico and closer to family. 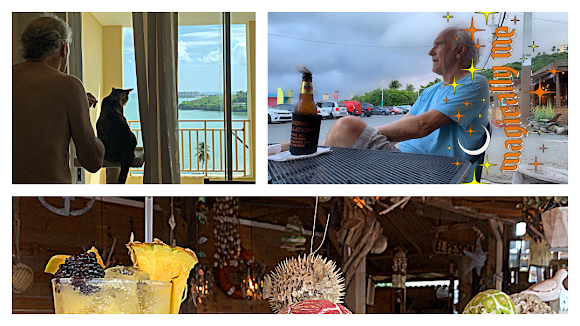 There is something at work in my soul,
which I do not understand...
~Nadiya~
Posted by Nadiya at Sunday, October 31, 2021

Labels: We make up horrors 👻 to help us cope with the real ones
Newer Post Older Post Home